Airports fascinate me in a lot of unspoken ways. The feeling of watching airplanes taking off beside the thick wide glass of boarding room almost always make my heart jolts with excitement. There is a certain atmosphere that airports bring — they are home to some of the most sincere goodbyes, spectator of willingness to release someone dear into the unknown skies, and a theater of honest kisses blown to the air. Airports are about departure and arrival, the fast-paced shoes of businesspeople and the joy of a loving child. The beautiful mix of feelings in one single space. Much like the real life.

For me, airports resemble more than just a transportation facility where people come and go. As someone who was not raised in a particularly wealthy family, hopping to an airplane was indeed a luxury. During my childhood, I had to spend so much time going through road trips to get somewhere. I always asked my mom if our family could try travelling by airplane, but I knew she would say it was too expensive for all of us. Like every other luxury my family couldn’t afford, at that time I could hear mom’s voice resonating,

“Believe me, my child, your brain will take you anywhere you wish”

The first time I boarded a plane was in January 2011, going to Eastern part of Indonesia for a national varsity debating championship. I still remember that feeling of excitement mixed with I-think-I’m-gonna-puke inside a not-so-good airplane of the first flight in the morning. Kinda like being in a roller coaster while taking off, my heart was swelling with oh-my-gosh that I tried to hide from friends.

Ever since then, airplanes continued to take me into some of the best moments of my life. I could picture that clearly, vividly, the memory that goes up to the surface every time I see an Etihad plane parking on Terminal 2 of CGK airport. 4 pm flight to Abu Dhabi, that would carry my New York City dreams up to the air, my very first overseas flight, 32 hours in total.

I never boarded Etihad since then, but it remains one of my favorite airline. I remember the friendly stewardess greeted me, I was having cough, and she attentively offered me another cup of hot drink. We met again on the way when I was going to the toilet, and chatted on how people were not easily pleased even by various choices of menu available. I told her that people were always unsatisfied like that, and we laughed together 😀

It’s funny how you can associate a certain part of your life just by looking at an airplane.

I was rushing on catching a Garuda Indonesia flight when my eyes caught a glimpse of a Cathay Pacific being parked. As melancholic as I always am, the laughter of my mapres friends came to my ear like a jingle. Jakarta – Hong Kong – Nagoya. Then another flight back from Tokyo. The gleaming lights, the busy streets, the bullet trains, stranded on the super clean streets at 2 am after missing our last bus back to the hotel. Our Toyohashi friends, mixed with streams of Kit Kat Green Tea supplies…

Soekarno-Hatta International Airport is home to some of my most memorable departures and arrivals.

The fight with my ex-boyfriend before I boarded a Singapore Airlines flight to Manila. Two girls giggling with their extra-heavy luggages on Airport Transit Hotel, woke up super early while catching the first flight to Singapore that would take Team Indonesia to the city of Hanoi. Four nista youngsters boarding the cheapest AirAsia flight we could find from Jakarta to Bangkok. Every time I come to CGK, I can still picture the places precisely, every corner hides another story that I could recall from the back of my head.

From a homey kid who never boarded any plane since age zero, I turned into a frequent flyer with various destinations to go.

Times change and airplanes change. People morph over time — leaving their loved ones while pursuing their own dreams. I’ve moved from Bandung to Duri, where my limited stay at home makes the journey even more meaningful. What used to be rare international flights have changed to frequent domestic flights to hold the ones close to the heart. Garuda Indonesia and AirAsia have helped me in transporting to the people I care about the most, the people I would not trade for any gems.

Airplanes have witnessed my struggle of getting to be where I never thought I could be. My proud parents who could never make me go to another country by their own money. The altitude combines some of fondest memories, best friends, and most exciting journey into the take offs and landings that I will always be excited for.

Here’s hoping for more life stories through the air! 🙂 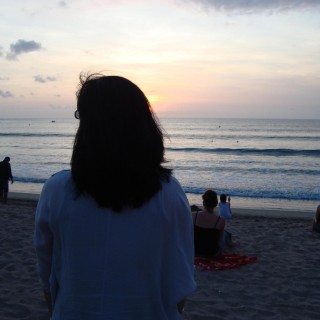